December 21, 2015
 Category Uncategorized
Here’s a new level of fan loyalty we haven’t seen in the United States quite yet. City leaders in Manchester City, England are considering covering the cost of laser tattoo removal for any fans of the city’s soccer team should the team move forward with plans to redesign its logo, according to reports in the The Sun.

While covering the cost of tattoo removal for people in Texas with soccer team tattoos might be a small undertaking, by the looks of the tattooed Brits, it could be quite an expensive and time-consuming endeavor.

Take this guy’s tattoo that The Sun ran a photo of — not only is it multi-colored, but on his scalp, where tattoos can be more difficult to remove.

So what about it, Houston City Council? Can we get a subsidy to cover the cost of fading outdated Astros tattoos like this one? 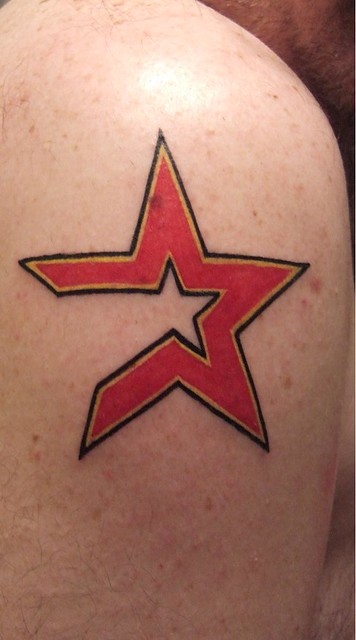 We’d be pretty shocked to see that happen. But that doesn’t mean if you’re sporting an old team logo, whether it be from the Biggio-era Astros or the Earl Campbell-era Oilers, you’re stuck with it forever. At New Look Houston, we can help make those sports logo tattoos fade away. Contact us today at 713-783-2000 for a free consultation.